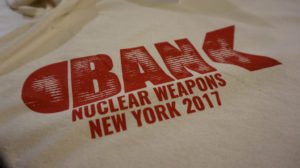 22 May 2017 – Draft Convention on the Prohibition of Nuclear Weapons

Submitted by the President of the Conference

The States Parties to this Convention,

Deeply concerned about the catastrophic humanitarian consequences that would result from any use of nuclear weapons and the consequent need to make every effort to ensure that nuclear weapons are never used again under any circumstances,

Cognizant that the catastrophic consequences of nuclear weapons transcend national borders, pose grave implications for human survival, the environment, socioeconomic development, the global economy, food security and for the health of future generations, and of the disproportionate impact of ionizing radiation on maternal health and on girls,

Basing themselves on the principles and rules of international humanitarian law, in particular the principle that the right of parties to an armed conflict to choose methods or means of warfare is not unlimited and the rule that care shall be taken in warfare to protect the natural environment against widespread, long term and severe damage, including a prohibition of the use of methods or means of warfare which are intended or may be expected to cause such damage to the natural environment and thereby to prejudice the health or survival of the population,

Declaring that any use of nuclear weapons would be contrary to the rules of international law applicable in armed conflict, and in particular the principles and rules of humanitarian law,

Reaffirming that in cases not covered by this convention, civilians and combatants remain under the protection and authority of the principles of international law derived from established custom, from the principles of humanity and from the dictates of public conscience,

Determined to contribute to the realization of the purposes and principles of the Charter of the United Nations,

Bearing in mind that the prohibition of nuclear weapons would be an important contribution towards comprehensive nuclear disarmament,

Stressing the urgent need to achieve further effective measures of nuclear disarmament in order to facilitate the elimination from national arsenals of nuclear weapons and the means of their delivery,

Determined to act towards that end,

Determined also to act with a view to achieving effective progress towards general and complete disarmament under strict and effective international control,

Affirming that there exists an obligation to pursue in good faith and bring to a conclusion negotiations leading to nuclear disarmament in all its aspects under strict and effective international control,

Stressing the role of public conscience in the furthering of the principles of humanity as evidenced by the call for the total elimination of nuclear weapons and recognizing the efforts to that end undertaken by the United Nations, the International Committee of the Red Cross, numerous non -governmental organizations and the Hibakusha,

Have agreed as follows:

Receive the transfer or control over nuclear weapons or other nuclear explosive devices directly, or indirectly;

Carry out any nuclear weapon test explosion or any other nuclear explosion;

Assist, encourage, or induce, in any way, anyone to engage in any activity prohibited to a State Party under this Convention;

(g) Seek or receive any assistance, in any way, from anyone to engage in any activity prohibited to a State Party under this Convention .

Any stationing, installation or deployment of any nuclear weapons or other nuclear explosive devices;

Any nuclear weapon test explosion or any other nuclear explosion .

Each State Party shall submit to the Secretary -General of the United Nations, not later than 30 days after this Convention enters into force for it a declaration in which it shall declare whether it has manufactured, possessed or otherwise acquired nuclear weapons or other nuclear explosive devices after 5 December 2001.

The Secretary-General of the United Nations shall transmit all such declarations received to the States Parties.

Each State Party undertakes to accept safeguards, with a view to preventing diversion of nuclear energy from peaceful uses to nuclear weapons or other nuclear explosive devices, as provided in the Annex to this Convention.

Measures for States that have eliminated their nuclear weapons

Each State Party that has manufactured, possessed or otherwise acquired nuclear weapons or other nuclear explosive devices after 5 December 2001, and eliminated all such weapons or explosive devices prior to the entry into force of the Convention for it, undertakes to cooperate with the International Atomic Energy Agency for the purpose of verification of the completeness of its inventory of nuclear material and nuclear installations.

Unless otherwise agreed by the States Parties, arrangements necessary for the verification required by this Article shall be concluded in an agreement between the State Party and the International Atomic Energy Agency. Negotiation of such an agreement shall commence within 180 days of the submission of the declaration provided for in Article 2. Such agreements shall enter into force not later than eighteen months after the date of the initiation of negotiations.

For the purpose of performing the verification required by this Article, the International Atomic Energy Agency shall be provided with full access to any location or facility associated with a nuclear weapon programme and shall have the right to request access on a case-by-case basis to other locations or facilities that the Agency may wish to visit.

Measures for situations not covered by Article 4

Proposals for further effective measures relating to nuclear disarmament, including provisions for the verified and irreversible elimination of any remaining nuclear weapon programmes under strict and effective international control, which may take the form of additional protocols to this Convention, may be considered at the Meetings of States Parties or Review Conferences. All States represented at the meeting or review conference may participate fully in such consideration. The meeting or review conference may agree upon additional protocols which shall be adopted and annexed to the Convention in accordance with its provisions.

Each State Party in a position to do so shall with respect to individuals affected by the use or testing of nuclear weapons in areas under its jurisdiction or control, in accordance with applicable international humanitarian and human rights law, adequately provide age- and gender-sensitive assistance, including medical care, rehabilitation and psychological support, as well as provide for their social and economic inclusion.

Each State Party with respect to areas under its jurisdiction or control contaminated as a result of activities related to the testing or use of nuclear weapons or other nuclear explosive devices, shall have the right to request and to receive assistance toward the environmental remediation of areas so contaminated.

Each State Party shall, in accordance with its constitutional processes, adopt the necessary measures to implement its obligations under this Convention.

Each State Party shall take all appropriate legal, administrative and other measures, including the imposition of penal sanctions, to prevent and suppress any activity prohibited to a State Party under this Convention undertaken by persons or on territory under its jurisdiction or control.

Each State Party shall cooperate with other States Parties to facilitate the implementation of the obligations of this Convention.

In fulfilling its obligations under this Convention each State Party has the right to seek and receive assistance.

The operation and status of this Convention;

Reports by States Parties on the implementation of their obligations under this Convention;

Matters arising from the declarations submitted under Article 2 of this Convention;

Proposals for effective measures relating to nuclear disarmament, including provisions for the verified and irreversible elimination of nuclear weapon programmes , including additional protocols to this Convention.

When a dispute arises between two or more States Partie s relating to the interpretation or application of this Convention, the parties concerned shall consult together with a view to the expeditious settlement of the dispute by negotiation or by other peaceful means of the parties’ choice, including recourse to the Meetings of States Parties and, by mutual consent, referral to the International Court of Justice in conformity with the Statute of the Court.

This Convention shall be open for signature to all States before its entry into force.

This Convention shall be subject to ratification by signatory States.

The Articles of this Convention shall not be subject to reservations.

This Convention shall be of unlimited duration.

Each State Party shall in exercising its national sovereignty have the right to withdraw from the Convention if it decides that extraordinary events, related to the subject matter of this Convention, have jeopardized the supreme interests of its country. It shall give notice of such withdrawal to all other Parties to the Convention and to the United Nations Security Council three months in advance. Such notice shall include a statement of the extraordinary events it regards as having jeopardized its supreme interests.

Such withdrawal shall only take effect three months after the receipt of the instrument of withdrawal by the Depositary. If, however, on the expiry of that three-month period, the withdrawing State Party is engaged in the situations referred to in Article 2 common to the Geneva Conventions of 12 August 1949 for the Protection of War Victims, including any situation described in paragraph 4 of Article 1 of Additional Protocol I to these Conventions, the Party shall continue to be bound by the obligations of this Convention and of any annexed Protocols until the end of the armed conflict or occupation.

Relations with other agreements

This Convention does not affect the rights and obligations of the States Parties under the Treaty on the Non-Proliferation of Nuclear Weapons.

The Secretary-General of the United Nations is hereby designated as the Depositary of this Convention.

The Arabic, Chinese, English, French, Russian and Spanish texts of this Convention shall be equally authentic.

The Agreement referred to in paragraph 1 above shall be, or shall be equivalent in its scope and effect to, the agreement required in connection with the Treaty on the Non-Proliferation of Nuclear Weapons (INFCIRC/153 (corrected)). Each State Party shall take all appropriate steps to ensure that such agreement is in force for it not later than eighteen months after the date of entry into force for that State Party of this Convention.

Each State Party undertakes not to provide source or special fissionable material, or equipment or material especially designed or prepared for the processing, use or production of special fissionable material for peaceful purposes to: (a) any non-nuclear-weapon State party to the Treaty on the Non-Proliferation of Nuclear Weapons unless subject to the safeguards required by Article III.1 of that Treaty; (b) any other State unless such material or equipment is subject to applicable safeguards agreements with the International Atomic Energy Agency and shall be used for exclusively peaceful purposes.