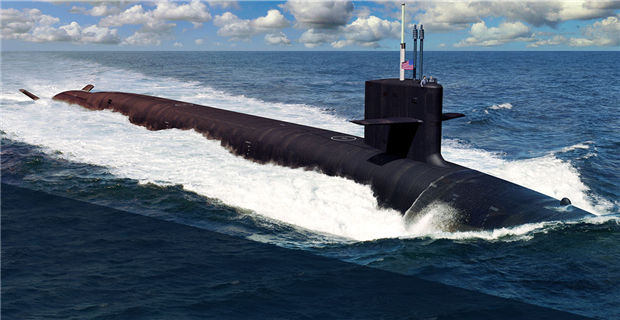 In September 2017, the ship builder Electric Boat was awarded $5 billion to proceed with the design phase of the next-generation of U.S. nuclear-powered ballistic-missile submarines, also known as SSBNs or “boomers.” A dozen Columbia-class submarines will start replacing the fourteen enormous but stealthy Ohio-class boats [3] that constitute the scariest weapon system in the United States’ arsenal.

Ballistic-missile subs are basically a vengeful kind of life-insurance policy for the nation—one that hopefully will never be called due. If the United States were confronted by an existential threat—i.e., a nuclear attack—then just a few boomers could rain nuclear warheads on every major city or military base in a hostile nation. This is because each SSBN carries over a dozen Submarine-Launched Ballistic Missiles (SLBMs) that can be fired from underwater to hit targets far across the planet. While in flight, these Trident missiles split into multiple independent nuclear warheads (MIRVs) that each can land on a separate target.

Recommended: 8 Million Could Die in a War with North Korea [4]

The intent in producing such apocalyptic death machines is not so much to use them, but to deter other nations from using their own nuclear weapons (which may also be launched by SSBNs). In this role, submarines stand as the most reliable leg of the nuclear triad; while an opponent might imagine that they can knock out nuclear-armed bombers and land-based missile silos with a surprise first strike, there is no chance that they could locate all of an adversary’s patrolling SSBNs dispersed across the globe, running quietly in the depths of the ocean for months at a time without surfacing. The Navy even maintains a fleet of aircraft [5] specifically assigned to transmit nuclear launch codes to submarines via low-frequency radios in the event of an emergency.

Recommended: The Real Reason China Has Built a Massive Military [6]

The current Ohio-class submarines serve very well as highly stealthy, mobile nuclear missile silos. Built with the capacity to launch twenty-four SLBMs, the type happens to be the most heavily armed SSBN class ever made. Because the basic formula for a ballistic missile submarine is well established by now, the Columbia class will seek to perform that same mission more efficiently, and even more quietly to keep pace with advances in antisubmarine warfare.

Recommended: Inside America’s Most Secret Submarine Ever [7]

In fact, the Columbia’s ballistic-missile armament will be decreased from twenty-four to sixteen. This is not as big a reduction as it seems, as under the terms of the START treaty, the number of operational missile launch tubes aboard Ohio-class boats had been decreased to twenty, with fewer warheads on each missile. The new boats will use a Common Missile Compartment that will also be fitted onto the UK’s four upcoming Dreadnaught-class multirole boomers.

The new boomers will maintain roughly the same crew (155 officers and sailors), length (170 meters) and beam size (increased from forty-two to forty-three feet) as the Ohio-class submarine, and displace about 11 percent more, at 20,815 tons submerged. Extra space saved from having fewer missiles will likely accommodate future active stealth devices and computer systems, though the Navy is keeping understandably quiet about what those may entail.

The Columbia’s design will draw heavily from the Virginia-class nuclear-powered attack submarine, which is becoming the mainstay of the U.S. Navy’s submarine force. Features passed on from the Virginia include the vessel’s pump-jet propulsion system, the S9G reactor, a large-aperture bow array sonar, fiber-optic imaging masts and anechoic tile configuration.

Unlike earlier U.S. nuclear submarines, the Columbia will not require a highly expensive and extremely time consuming midlife nuclear refueling during its forty-two-year service life. Another major new item is an electric drive. Currently, nuclear-powered submarines use reduction gears to reduce the phenomenal spin rate produced by nuclear steam turbines to a number of rotations per minute appropriate for submarine propulsion; the Columbia’s system will instead use the steam turbines to generate electrical power that will turn the shaft more quietly and also power the rest of the submarine. The U.S. Navy earlier experimented with two troublesome electric-drive subs in the past, but the only turbo-electric submarine type currently in operation is the Triomphant class, in French service. Developing the Columbia’s system was apparently tricky, contributing to a two-year delay in the program.

The new ship will also feature an X-shaped control surface (rudder fins), which should offer superior maneuverability and improved acoustic stealth [8]. Lastly, the Columbia will also be the first U.S. submarine designed to accommodate female crew [9], with separate bunks and restrooms, and controls situated to be accessible for shorter crew members; 130 female officers and enlisted women already serve onboard U.S. Navy submarines, a number expect to grow.

The new features add up to a submarine that will do the same job as the Ohio class more quietly and more efficiently. Construction of the Columbia is due to begin in 2021, but it isn’t planned to enter active service until 2031. The Navy would like to acquire twelve to replace the fourteen remaining Ohio-class SSBNs between 2030 and 2040. The smaller number of SSBNs will be capable of maintain the same tempo of operations due to their improved design and the fact that they won’t require nuclear refueling. Each of the new submarines is expected to serve forty-two years, during which time it could embark on as many as 142 patrols using rotating Blue and Gold crews.

However, the new type comes with a steep upfront cost: the first submarine is expected to cost $12 billion, while subsequent boats in the class will clock in at around $5.9 to 6.5 billion each. Total estimated program cost with R&D expenses folded in adds up to $100 billion according to a congressional report [10] —or $128 billion adjusted for predicted future inflation [11]. Oh, and the Navy has assigned only a “43% confidence interval” that it will keep costs at or below that target.

Some argue that given the overkill of the boomers’ nuclear firepower, the declining number of U.S. SSBN patrols [12], the even more drastic decline in Russian patrols (only five in 2015, down from 102 Soviet patrols in 1984), and the Navy’s struggle to maintain enough surface warships, the Pentagon should acquire a smaller number of Columbia-class subs. However, because the boomers’ mission is of such strategic importance, the Navy leadership sees some redundancy as necessary to maintain a ten-submarine force that can avoid any gaps in deterrence [13] from cropping up.

Sébastien Roblin holds a Master’s Degree in Conflict Resolution from Georgetown University and served as a university instructor for the Peace Corps in China. He has also worked in education, editing, and refugee resettlement in France and the United States. He currently writes on security and military history for War Is Boring [14].