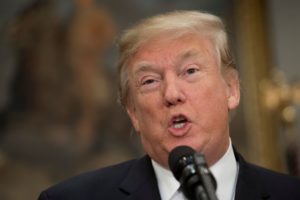 When President Trump decertified the Iran nuclear deal, he was punting the question of whether it should be torn up to Congress. Congress just punted it back to him — and he’s back to square one, with the deal he promised to scrap still in place.

That’s because Tuesday was the deadline for Congress to take advantage of a law that made it incredibly easy to impose the kind of sanctions on Iran that would likely kill the deal. Republican lawmakers didn’t do that. Nor have they made any progress on a bill that would have imposed stricter conditions on Tehran. In other words, the deal remains as it always was, despite Trump’s fiery criticism of it.

The fight over the nuclear deal’s future began in October, when Trump declared that Iran was not complying with all the terms of the Obama administration’s pact with Tehran and that the deal itself was not in America’s national security interest.

But instead of torpedoing the deal himself, he decided to put the fate of the bill in Congress’s hands.

When Trump decided to “decertify” the Iran deal under the Iran Nuclear Agreement Review Act, it opened a 60-day window for Congress to easily reimpose old sanctions on Iran that would end the deal. During that time, Republicans were able to use a special expedited process that protects the sanctions bill from being filibustered by opponents.

Analysts say the strategy allowed Trump to avoid taking the blame for the catastrophic effects of the deal’s potential collapse. Yet it also let Trump tell his political base that he had set the stage to pull the US out of a deal that has been massively unpopular in conservative circles since the day it was passed.

But Tuesday marks the 60-day deadline, and Congress did not reimpose any of the sanctions that would end the deal. Now that the window has closed, reimposing sanctions will inevitably require winning over Democrats in the Senate to pass — a political impossibility.

Congress has also not come close to passing any kind of bill that would “address the deal’s many flaws” that Trump referred to in his speech.

The president has said, for example, that he wanted Congress to look at how the US can potentially get tougher about the Iran deal’s sunset clauses, which allow some of the deal’s limitations on Iran’s nuclear activity to lapse in coming years. The deal’s critics argue that Tehran will then resume its quest for a nuclear weapon, without fear of the punishing economic sanctions it had once faced.

Republican Sens. Tom Cotton (AR) and Bob Corker (TN) put together a legislative proposal that would have tightened the deal by, among other things, automatically slapping sanctions on Iran if it got within a year of obtaining a nuclear weapon.

But that proposal hasn’t gone anywhere.

Ilan Goldenberg, a Middle East expert at the Center for a New American Security and former senior Pentagon official, told me the Trump administration generally “hasn’t been engaged on the Hill” to develop legislation that could potentially strengthen the Iran deal.

The drama over the fate of the Iran deal is far from finished, though. In mid-January, the Trump administration faces two major deadlines on the deal that could again jeopardize its existence.

First, there is the question of whether Trump will issue a waiver around January 15 that keeps old sanctions from being imposed that would violate the terms of the Iran deal. If Trump refrains from issuing that waiver, the deal will essentially be dead.

Second, at about the same time, Trump will have to decide again whether he wants to certify Iran as complying with the deal or not. And if he declines to do so, yet another special 60-day window will be opened during which Congress can easily slap old sanctions on Iran’s nuclear activity.

Candidate Trump promised to end the Iran deal. President Trump has yet to do so. The question now is which Trump ultimately makes the call.