WASHINGTON (Kyodo) — U.S. President Donald Trump’s administration will adopt a policy allowing the flexible use of nuclear weapons through the new Nuclear Posture Review to be unveiled as early as February, according to congressional and diplomatic sources. 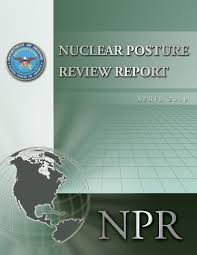 Such a shift would mark a major departure from the nuclear policy advocated by Trump’s predecessor Barack Obama who pledged in 2009 to pursue a “world without nuclear weapons.”

A reflection of Trump’s wish to preserve “peace through strength,” the Republican administration will not limit the role of nuclear weapons to deterrence and counterattacks against a nuclear attack, they said.

In the last policy review released in 2010, Obama said his Democratic Party administration would consider the use of nuclear weapons “in extreme circumstances” to defend the vital interests of the United States or its allies and partners.

Unlike Obama, Trump has not ruled out the possibility of launching nuclear attacks in response to cases such as a cyberattack on the basic infrastructure of the United States, according to the sources.

On Jan. 27, 2017, a week after Trump took office, he directed Defense Secretary Jim Mattis to “initiate a new Nuclear Posture Review to ensure that the United States nuclear deterrent is modern, robust, flexible, resilient, ready and appropriately tailored to deter 21st-century threats and reassure our allies.”

The Nuclear Posture Review serves as a guideline for U.S. nuclear policy for the coming years.

With attacks on nuclear and missile facilities in North Korea not ruled out, the Trump administration will consider developing and deploying new low-yield tactical nuclear weapons to be delivered by ballistic missile and submarine platforms.

The administration says it is keeping all options — including military action — on the table in dealing with North Korea, which it calls a “rogue state” due to its aggressive development of a nuclear-tipped intercontinental ballistic missile capable of hitting the United States mainland.

Labeling China and Russia “revisionist powers,” the U.S. National Security Strategy released in December said the two countries “are fielding military capabilities designed to deny America access in times of crisis and to contest our ability to operate freely in critical commercial zones during peacetime.”

The administration will also promote the development of nuclear-armed cruise missiles, according to the sources.

The administration appears to have started talks with Japan and other countries about the future deployment of such missiles.